Create an Account - Increase your productivity, customize your experience, and engage in information you care about.

The City of Ardmore operates a wastewater treatment facility located immediately north of the Valero Refinery on Sutton Road near Mesa Road. The facility, which was built and put online in 1985, treats the entirety of the city’s domestic wastewater.

There are 13 lift stations throughout the city with the largest station handling approximately 2 million gallons per day. 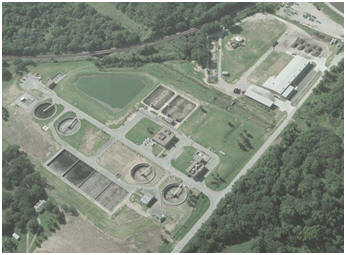 Sequencing Batch Reactor
The treatment plant process is a Sequencing Batch Reactor system which biologically treats approximately 6 million gallons per day (mgd). The city’s normal average flow is about 3.5 mgd. The treated water is into Sand Creek which flows into Caddo Creek. There are various states of process that the wastewater follows through the facility. Here is that process which it follows:

Step 1
Wastewater enters the plant at the Main Lift Station which pumps the wastewater into and through the Grit Building. The Main Lift Station has 4 each 75 hp pumps that can pump at a rate of about 10 million gallons per day (mgd). From the lift station the sewage flows through an aerated grit removal system. The liquid from this process is then directed through a mechanical screen which further removes other solid materials.

Step 2
The liquid sewage then is directed to 1 of 4 large concrete basins, each of which is 100 feet wide, 120 feet long, about 20 feet deep, and holds about 1.5 million gallons. The liquid sewage accumulates in the selected basin and, once the basin has properly filled, air is injected into the raw sewage while it is circulated by a pump in each basin. The combination of circulation and injected air enables microorganisms to be break down the sewage.

Step 3
After about 4 hours of aeration, the circulation pump and blowers are shutdown and the remaining solids in the liquid in the basin are allowed to settle for about an hour. The water in the upper half of the basin is clarified and then decanted through a discharge pipe to the Effluent Lift Station.

Step 4
At the Effluent Lift Station the clarified liquid is pumped to the surface and directed through a series of filters which further remove any remaining suspended solids. The water at this point is quite clear but is not yet safe to discharge to the receiving stream.

Step 5
It then flows into a Chlorination Basin where the effluent is mixed with chlorine which is a powerful and effective disinfectant which kills any remaining bacteria, viruses, or coliform. Once the liquid has been chlorinated, sulfur dioxide is injected to the end of the basin which reacts with and removes any remaining chlorine in the effluent.

Step 6
Once the treated water, which is now clear and quite clean, leaves the Chlorination Basin, it flows to and down a cascade into Sand Creek. The cascade reaerates the effluent liquid which makes it not only safe but wholesome for fish and wildlife.

Cocomposting
The wastewater treatment process creates a large volume of liquid sludge which must also be treated. The city treats its sewage sludge by means of cocomposting with wood amendment. The Cocomposting Facility receives liquid sludge from the main plant where the wasted sludge is mechanically-dewatered to the point that it looks like a dry mud. The dewatered sludge is then carefully mixed with ground wood chips in such proportions to facilitate composting.

The composting process generates, over a 21 day period, enormous amounts of heat which reduce the sludge volume, cause it to further dewater, and, most importantly, kills bacteria and viruses. The mixed composted material, known as Okie Dirt™ is then safe for use as a soil amendment in gardens, farms or highway rights of way.

Airpark Sludge Treatment Plant
The City of Ardmore also maintains and operates an activated sludge treatment plant north of the city at the Ardmore Industrial Airpark. This plant handles domestic wastewater as well as wastewater from industries at the Airpark.
Online Payments
Notify Me®
Request Tracker
Agendas & Minutes
[]